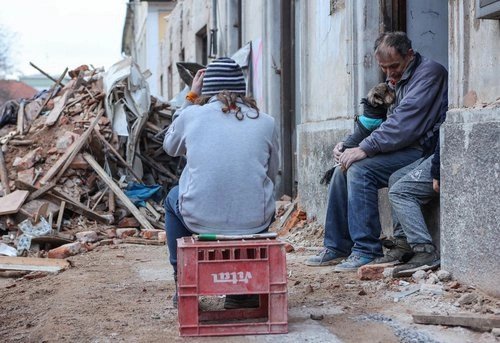 Today we went out with collected (dry) food. We supply these to Rene Pronk. He has been visiting many elderly for years, whom he supports with clothing and food and some fun. We do not intend to visit these elderly people, because there is so much self-confidence in these elderly people and they do not want to accept help from third parties. That’s why my wife Natascha and our three girls are with us. After all, there is also snow there. After a short drive of 3 hours and seeing the most beautiful winter images flash by, we arrived at Rene.

After a warm welcome, cup of coffee and a tour, we started unloading the +/- 100 kg feed. 75% of this food was collected by facebook volunteersgroep vanuit_istrie.

After unloading we were given a tour of his photo gallery. Rene takes many landscape photos, but also many photos of the elderly he visits.

The kids were still playing in the snow with his son, so lunch was offered.

We will soon be invited to his tour. To get to know the lonely elderly.

If you want to see more pictures of Rene, look here: Rene Pronk

Our car is loaded and the trailer is full. Ready for another trip to the disaster area on Friday 15 January.

Tonight I thought differently. In the Netherlands, Belgium and Germany there is no news at all about the misery that is going on here. No one knows that after 8 days villages were reached where people were sitting with collapsed houses and who thought the world was about to end. no electricity / water and the roads cannot be driven through the cracks in the ground or due to subsidence. The whole area has now dropped 30 centimeters and there is a gap of kilometers through the epicenter. Every day there are vibrations with 2-2.5 to 4 on the Richter scale. Sometimes parts of houses still fail.

When I was there on January 1 with a convoy of caravans and relief supplies, we also saw streets blocked that had not yet been in the local news. Bulldozers and cranes were busy clearing the streets and removing the last bits of walls and roofs that were about to collapse. Everyone knows it’s not just over and will go anywhere. Help is needed!!

Often people are also asked what kind of help is needed. Shall we send clothes or food? People who have been here as tourists, sometimes for years, sometimes don’t even realize how many people live here. Many people bake their own bread, and not from a package. Live on legumes from your own garden all winter and slaughter a chicken once a week. Although this region is known for its meat industry (Gavrilovic, the girl on the sausage cans and packaging), this region is very poor.

From the facebook group vanuit_istrie we have already been able to help a bit. In the end, we started collecting from different corners of the Netherlands and Belgium, who eventually also solved the transport problems themselves. We did not want to deliver centrally to a depot in the disaster area because a lot would disappear. There are also many stories circulating here. A truck with 10 tons of food from Germany has been brought directly to a warehouse in Zagreb and will never make it to the area and there are many more besides this story. That is why we have taken matters into our own hands. In which the group from Urk scored highest with a financial collection. who collected €4000 and came to Croatia with a caravan and lots and lots of blankets, heaters, clothes and much more. In the end, the group from Belgium also flooded a truck and stored 2 trucks with goods. Hellevoetsluis also came with a full car and so they surprised the red cross in Porec enormously. The 1st day we brought 16 pallets of goods and the 2nd day we even had to drive to the Rovinj depot. This is because there was simply no more space. and there we brought another 10 pallets of relief supplies.

Proud, proud and proud again that they did all this. Villa Selo Mekisi made his house available to spend the night there and we received these hardworking people with hot food and a good night’s sleep.

On the day of January 15 we will drive again. The notification to enter the area has been made again. This time we are going to the region with +/- 100 kg of feed. We hope that more people will read our blog and see the need for it.

Show your heart and support our cause. Support us here!!
Follow me

Click on the socials or book a holiday : https://mojadom.com/